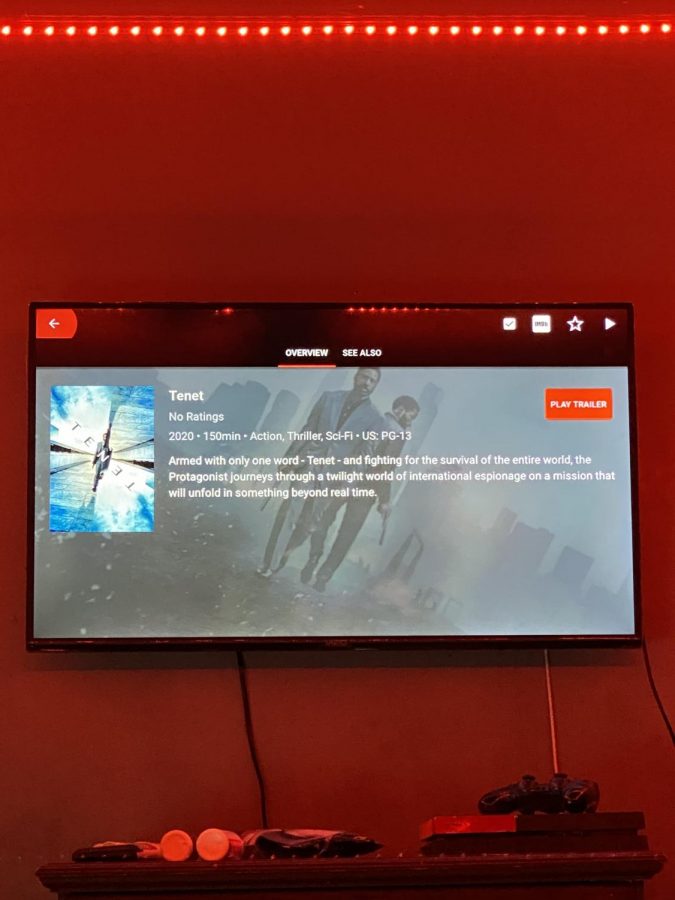 Preparing to watch Tenet in comfort

The action sci-fi movie Tenet starring John David Washington was highly anticipated with an original release date in August, but due to COVID, the release was pushed back to September.  The delay only increased fans’ anticipation.

The movie focuses on the “Protagonist,” played by Washington, discovering a time-inverting technology and going on a dangerous mission through time to save the world, all while trying to prevent a potential World War III.

As the film starts the protagonist is a CIA agent working with his team to extract another agent whose cover was blown during an assassination attempt on the agent. While heading towards the evacuation zone where he was supposed to meet the team, he was captured and tortured for information.  But instead of breaking and spilling the information, he uses a cyanide pill to end his own life.

Afterward, he wakes up in a facility and is told that because he followed protocol and did not betray his team, he will receive a pseudo promotion and become a “Tenet,” tasked to learn about and deal with a new type of technology that has dangerous implications if left unchecked.

Shortly thereafter, the Protagonist goes to another facility to learn about inverted weapons and technology from a scientist named Laura.

We all know the basic laws of physics –  that if a gun is shot the bullet will travel forward or if something is dropped it will fall to the ground However, inverted technology changes all of it. What makes the inverted weapons technology so terrifying is that it goes against the basic laws of physics. An inverted bullet will travel back to the gun from the impact point, and that’s just the start. People can be inverted too, and the entire world will be backward for them. For example, explosions will implode on themselves; a crashed car will flip back over and be perfectly fine; and wounds will heal themselves, all because time is in reverse.

After teaming up with Neil, a guy whose history and occupation are a mystery, the Protagonist tracks down a Russian arms dealer named Andrei through his connections to the inverted items. In an attempt to get closer to the dealer, the Protagonist uses Andrei’s wife Kat,who loathes Andrei due to his abusiveness and blackmailing.

Set up with a connection to the dealer and a partner to help him, the Protagonist sets his plan into action to stop the temporal doomsday.

The movie spends most of the time explaining its narrative and finally gets to the climax within the last 40 minutes. To me, the climax left a lot to be desired and didn’t live up to the suspense that led up to it. Although in the end, it wraps up most questions asked and reveals secrets that were once hidden in mystery, the ending felt so rushed that it took away from some of the emotion that the scenes were supposed to invoke, and made it seem like the entire situation wrapped up too cleanly. Nevertheless, I enjoyed the movie and would watch it again if given the chance.

The initial response to the film was a box office disappointment, earning only $358 million while it was projected to have a $500 million-plus run. According to Deadline Hollywood, due to the problems of trying to show a movie during the pandemic and the expensive production costs, Warner Brothers, who distributed the movie, estimates that it might lose $50 million.