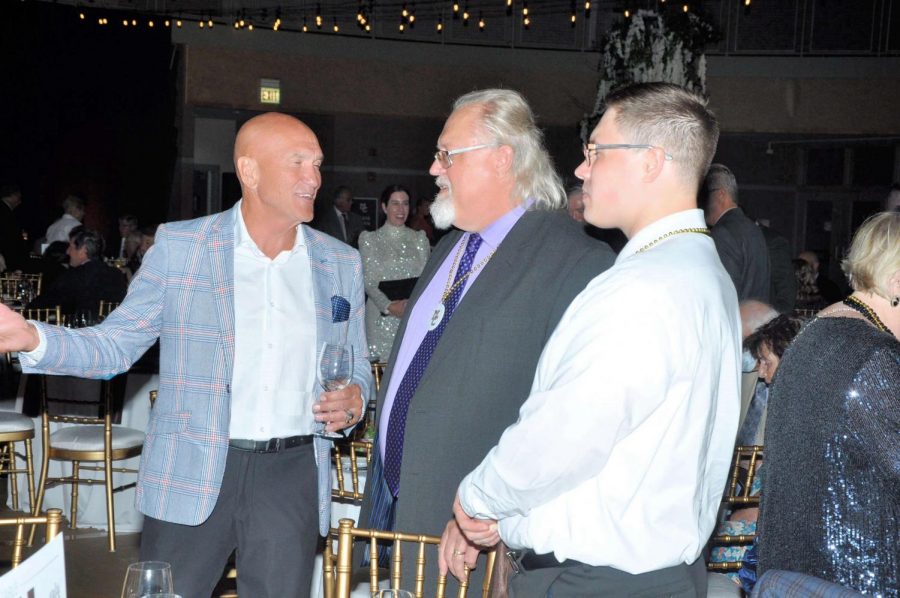 The two Mr. Novickases (center, right), current teachers at MC, speak with an alum at the 2021 Gala.

The new gym was bedazzled, the trees were lined with lights, and the new courtyard was the centerpiece of the party for some of Mt. Carmel’s most generous donors. The 2021 MC Gala was the first to ever be held on campus at Mt. Carmel. Most of the attendees of the gala were graduates, parents of graduates or current students, and current and former teachers. The gala took place on Saturday, September 18.

The MC Gala is usually held at a ballroom downtown, but circumstances beyond Mt. Carmel’s control meant that that was not an option this year. But with the recent renovation of the main building, new football stadium, new courtyard, and prayer garden this year, it was a golden opportunity to show off the sleek new look of many places on campus.

Many attendees had not come back to Mt. Carmel in over twenty years, even before the Graham Center was built. Some graduates had not been back since they graduated. One graduate from the class of 1965 said, “I can’t believe how much has changed.!”

People from many different classes were in attendance. There were Class of 1953 grads and Class of 2018 grads. Everyone began the night by mingling in the new courtyard, where a jazz band was playing. Then after a short performance by the drumline, they headed into the decorated new gym. There, dinner took place, and afterward was a donation session followed by a live auction.

The dinner was a multiple-course meal that included the finest hors d’oeuvres, succulent entrees, and a heavenly dessert of cheesecake. All portions of the night had open bars for the patrons, and there were many fine spirits available to those in attendance.

Then there was the live auction. Many items were auctioned off, including a football signed by the entire 2021 football team, which was sold for seven hundred dollars. There was also a silent auction, with bids on items such as Mt. Carmel quilts and artwork.

Overall, the Gala passed each goal that had been set, and the evening was a remarkably pleasant one. In total, the Gala raised $1.3 Million. This was the most successful Gala in Mt. Carmel History.

The money raised will greatly benefit Mt. Carmel students. The generosity of all those attending is remarkable. Their exceptional giving allowed the fundraising department to crush its goal and raise $1.3 Million to be used to better Mt. Carmel for all current and future students.

The tradition of Mt. Carmel is its strongest asset, once again proven by an insanely successful Gala. Not only did Mt. Carmel have roughly 400 supporters travel from as far as Florida for the Gala, but they collectively donated over a million dollars to the men of 6410.