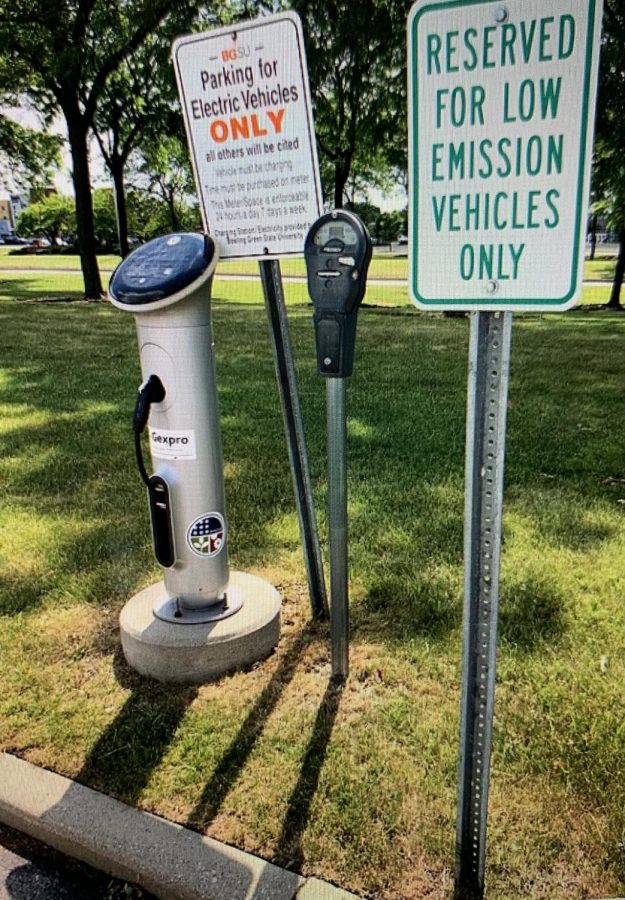 Parking spots exclusively for electric vehicles have popped up across the country.

An easy decision would be to convert to electric vehicles because they are better for the Earth. Internal combustion engines (gas cars) are killing the Earth with pollution. This poison includes nitrogen dioxide, carbon monoxide, hydrocarbons, benzene, and formaldehyde. Gas cars also release carbon dioxide, the most common greenhouse gas. Vehicle pollution contributes to global warming. Greenhouse gases heat the planet. This causes melting ice caps, rising sea levels, and an increase in natural disasters. Cars and trucks contribute about 20 percent of all emissions. Electric cars produce zero emissions. Electric vehicles (EVs) can save the Earth from dying of pollution. We can all pitch in and save the Earth, or we can let it die.

Electric cars are more convenient. It is easy to charge them at home, and t normally takes 8 to 10 hours for the battery to fully charge, so it happens while one sleeps, just like a cell phone. Electric vehicles can also be recharged at public outlets, of which tens of thousands already exist in the United States, with many more new charging ports being installed around the country every day. The number of outlets for electric cars will be at 60,000 by 2023.

Noise pollution is also an issue. Gas vehicles are extremely noisy, while electric vehicles have almost no noise.

Gas will burn or explode if there is an accident. This cannot happen with electric. No gas also means no chance of gas lines freezing during cold winters.

Auto Insurance Nerds notes that “repair costs on electric vehicles can be higher . . . which affects the price of maintenance and electric vehicle auto insurance.” This may seem to indicate that electric cars are more expensive to maintain, but that is not true. A 2018 University of Michigan study found that the average cost to operate an EV in the United States is $485 per year, while the average for a gasoline-powered vehicle is $1,117. The reason for this is because internal combustion engines have many moving parts. EV engines have only one moving part. Electric cars are also much cheaper for fuel. To drive 300 miles is about $6.86 for an electric car compared to about $35 for a gas car. Another financial example to support conversion is a tax credit of up to $7,500  is available when you purchase an electric car.

Globally converting to electric would mean much less dependency on foreign oil. Much less reliance on the Middle East is a good thing. With green energy options increasing the marriage between electric cars and green energy is a good match.

The future production of electric cars by Ford, GM, and other car companies is on the rise. This will drive down the cost of electric cars in the future. It will also provide more choices for drivers in the next few years. If many people in the world converted to electric cars, then we would have no worries about future generations.

The Mount Carmel community, the city of Chicago, and the state of Illinois would all benefit from cleaner air. People with asthma, COPD, or other breathing problems would benefit by going green.

Some people take breathing for granted. Those who have breathing difficulties would argue about how important, even life saving would be to them. A better air quality on the South Side of Chicago, as well as all over the world would be a fantastic change. The only way this can happen is if we all convert to electric.

Cleaner air and better life can be accomplished by going green. Converting to electric cars is a giant step in the right direction. The 20 percent pollution caused by cars and trucks in 2021 can be changed, though this change will not be easy. It will require many drivers to make the correct decision. The whole world must be involved in this project. Pollution does not stay in just one place.

It is abundantly clear that going electric is the proper result. EVs emit no pollutants and are more convenient, safer, and cheaper, plus they would help the United States be less dependent on Middle Eastern oil.

Our community would be able to breathe easier and would be a better place to live. It seems to be a no-brainer that converting to electric is the best call.