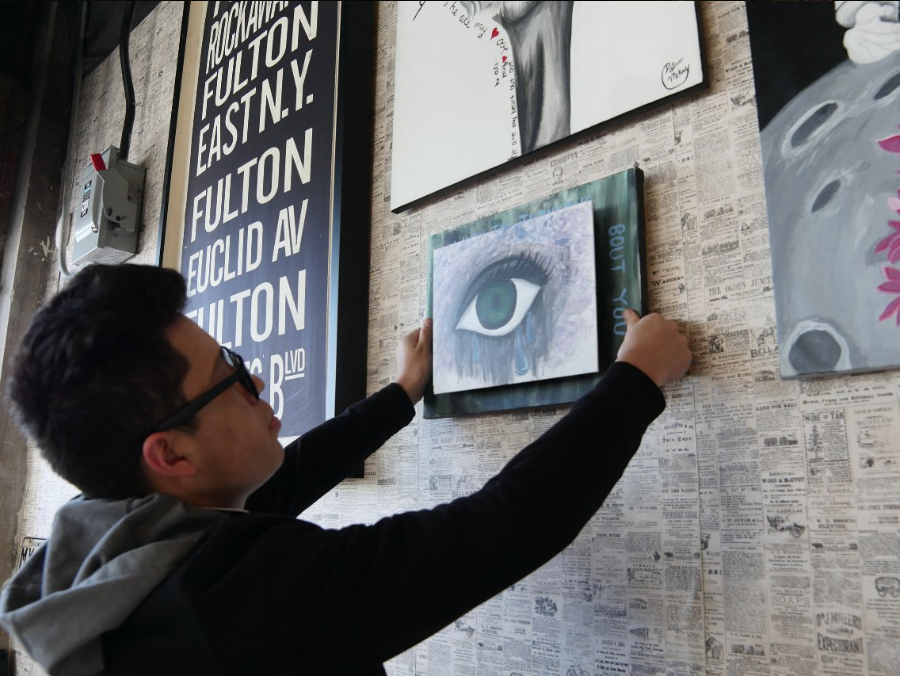 Junior Anthony Morales is one of several MC students whose art work is on display at Robust Coffee House.

But the 2010 opening of Robust Coffee Lounge, described in a February 21 Chicago Tribune article as a “retro-chic” café,  is one example of a local business that already is breathing new life into the Woodlawn community.  And Mount Carmel – as “retro-chic” as any boys’ school can be, has created a partnership with Robust that has benefits for both the business and our students.

There still are many empty lots along 63rd Street, awaiting revitalization of the Columbia Pointe development of single family homes, but the coffee house at 63rd and Woodlawn seems to be enjoying a fairly “robust” trade.  On any given day, local residents are joined by University of Chicago students and faculty, staff from the U of C Hospital, and even Mount Carmel faculty, who stop before work to pick up a cup of coffee and breakfast roll, or at lunch time for a sandwich.

Recently, one of those regular patrons, art teacher Julie Chappetto, jumped on an opportunity to develop a community partnership between Mount Carmel and Robust, in which the coffee house would display original work from student artists.

Chappetto had recognized that there were “many community art projects getting started around us” – in Hyde Park and through the University of Chicago – and simply felt “we need to get involved.”

So last December, after purchasing her morning cup of coffee, Chappetto approached Jake Sapstein, the owner of Robust Coffee Lounge, with the idea of providing gallery space for student artists from local high schools.  Sapstein – who according to Chappetto is himself an art collector and supporter of arts – was “all for the idea.”  That conversation launched the partnership, and in early February, Chappetto and her students gathered at Robust for the installation of 14 works by Mount Carmel artists, as well as three pieces by students at Kenwood Academy and three more from Hyde Park High School students.

The student art included paintings, photographs, and wire sculpture.  In addition to displaying the art, Sapstein suggested that each piece carry a price tag in case a patron was intrigued enough to inquire about purchasing the work.

Much to the surprise of one student artist, the first sale occurred almost immediately.  According to Chappetto, one of those students, Anthony Morales ’18 “did not really intend” to sell his work, and thought he had “priced it higher than anyone would want to pay.”  But a Robust customer liked the $75.00 price tag as much as the art itself, and quickly made the buy.

Patrick McKay ’18, who contributed an acrylic painting entitled “He ate my heart out,”  saw the art installation as “a really cool opportunity for young artists who don’t usually have the chance to get our names out there.”   In addition to paintings like McKay’s, the display includes digital art, photographs, and even wire sculpture, such as “Hold my hand,” by Emmett Kerrigan ’20.

In the near future, Chappetto hopes the project can reach another level through an evening event to which the artists’ parents and community members will be invited.

So, while there is work to be done to bring Woodlawn back to the level of economic vitality it once enjoyed, the needle seems to be moving in that direction, and as it has been for 117 years, Mount Carmel will plan to be at the heart of that revival.