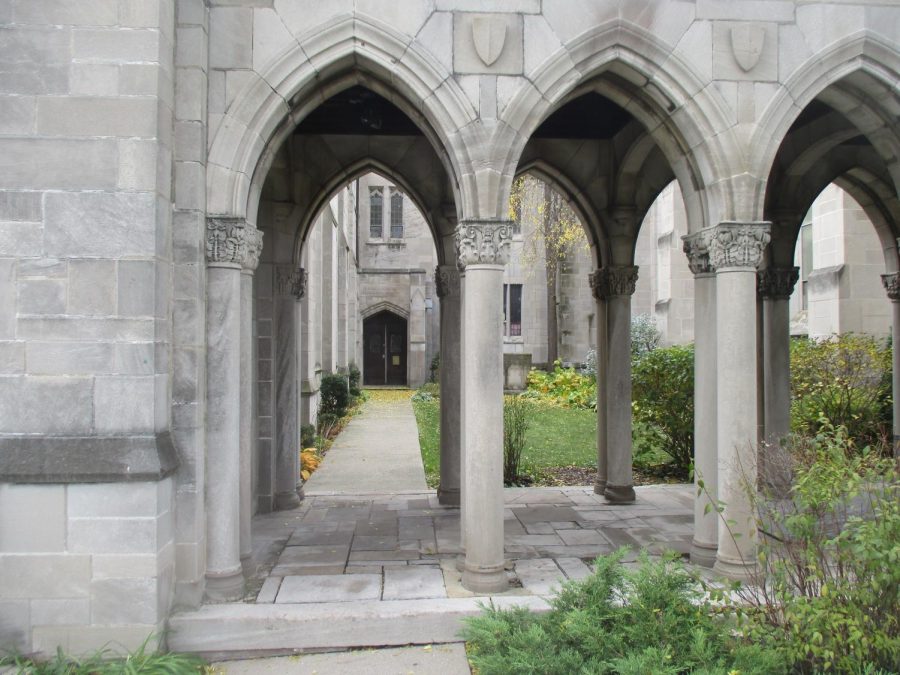 Gothic-Revival church has stones from famous buildings embedded in its exterior.

First Presbyterian Church, located just two blocks west of Mount Carmel at 6400 S. Kimbark, may not have the largest congregation these days, but it has a history rivaling any church in Chicago. The entire Caravan staff walked over to First Presbyterian recently to learn about our closest and oldest neighbor and to explore how our institutions might help one another.

Founded within the stockades of Fort Dearborn on the banks of the Chicago River in 1833, First Presbyterian was around even before the city was incorporated in 1837. Over the intervening decades, the congregation has relocated several times, moving from Fort Dearborn to various locations in what is now downtown Chicago, to the Prairie Avenue District, to Bronzeville and finally to Woodlawn where it merged with the Woodlawn Park Presbyterian Church.

The current 1,000-seat Gothic-Revival style church and related chapel, offices, gymnasium and meeting rooms were built in 1927 for a congregation of 3,000 people. The church architects were the noted firm of Talmadge and Watson. Stones from famous buildings are imbedded in the exterior, much like the treatment at the Chicago Tribune Tower.

One current church member, Mrs. Dianne Luhmann, was not around then, but has been involved at First Presbyterian for many decades, and remembers the church in a more vibrant era.

Luhmann was introduced to First Presbyterian through her husband’s family, and with him was a constant presence until his death last year.  For many years, she has volunteered as the church’s archivist/historian, and continues in that role in his honor.

Luhmann has witnessed a lot over the years, including “nearly see(ing) the whole neighborhood change in front of me.”

The area was once solidly middle class, but when the Depression hit the many apartment buildings in the neighborhood were split into smaller units. By 1960, Woodlawn’s population had increased to 81,000, but the demographics had shifted as the neighborhood had become 89% African American.

According to Luhmann, when the population declined and the demographics of Woodlawn began to change in the ’50s and ’60s, some church members wanted to relocate.  Others felt committed to the neighborhood and didn’t want to move.

During that era, a similar discussion was taking place down the street at Mount Carmel, where some felt the school should leave Woodlawn and relocate in the southwest suburbs.  The fact that both institutions ultimately decided to stay is one of the historical links between them.

A second link resulted from those decisions.

Mrs. Luhmann’s most memorable experience has been the diversity of the church. Mrs. Luhmann firmly believes that everyone should be concerned about social justice as well as being able to make the best of the neighborhood they are in. The diverse congregation at First Presbyterian even includes families from Nigeria and Cameroon.

Similarly, since the 1950s when the student body was nearly all white, Mount Carmel’s student body has diversified racially and geographically. Today’s enrollment features students from over 100 zip codes and nearly 200 grammar schools.

As the neighborhood evolved, First Presbyterian decided they needed to do its part to help community residents. In the 60s, it hosted one of the first Head Start Programs in Chicago. Head Start is a program of the United States Department of Health and Human Services that provides early childhood education, health, nutrition and parental involvement services to low-income children and their families.

More recently, First Presbyterian has addressed the food shortage needs of many local residents, first through a soup kitchen and more recently through a weekly food pantry.  The church also is one of the sponsors of the annual Hunger Walk on the South Side, an event that raises awareness and funds to address hunger.

The church also has acquired several vacant properties nearby, improved them and made them available for community gardens. Unfortunately, a recent dispute about the use of those gardens created some confusion, but the situation seems to be resolved.

Despite their commitment to the area, the congregation’s numbers have declined to about 30 regular members today. As the congregation aged, the younger generation did not fill in the pews. Reasons for the dramatic decline in membership are many: area violence, decreased population, general decline in church attendance and the financial challenge of a beautiful but aging structure built for a much larger congregation.

Rev. David Boumgarden was assigned to the church last April by the Presbytery of Chicago as a part-time interim pastor. Coming in, he knew it would be a challenge, and he admitted that his first impressions involved concerns about the amount of work that needed to be done.  Over the past year, however, things have “stabilized” for Boumgarden and the church, and he believes that the relationships he has made have gotten stronger.

Still, the challenges are significant, and Boumgarden admits that “sometimes, it does not feel like a part-time job.” He added, “It doesn’t matter how many come to Sunday service; it still requires the same amount of preparation.”

Boumgarden and occasional volunteers help with the gardens at Woodlawn and 65th Street. The church is able to sustain its basic activities and also provide resources for a soup kitchen and food pantry with the help of income from a trust fund that had been established many years ago.

As First Presbyterian struggles to re-establish itself, it has tried to find ways to raise its profile in the community.  The church has participated in Open House Chicago for the last few years, and recently invited the MC choir to sing at Sunday worship.

Mount Carmel’s choir and band will return to First Presbyterian for a Christmas concert on Tuesday, Decmber 18, beginning at 7 PM.  All students, parents, alumni and friends are encouraged to attend.  A light reception will follow the program

In all of its efforts to reach out to the Woodlawn community, the message First Presbyterian wants to spread simple: “We are here” and willing to help the people of Chicago.

Hope for the future

Boumgarden has high hopes for the future of the church, but also is realistic.

“It takes a community with a core group of people drawn to the vision.”

There is hope. A local upswing is in the air. Woodlawn is experiencing new construction for the first time in many years including schools, single family and multi-family housing, a Jewel store, gardens, viaduct repairs, road construction, and the proposed Obama Library.

The University of Chicago, developer Preservation of Affordable Housing (POAH), and the Obama Foundation are among those making significant financial and construction commitments in Woodlawn.

First Presbyterian’s immediate neighbor to the west, the Shrine of Christ the King, is rebuilding its historic Catholic church damaged by fire three years ago. All of these developments are good for the area, and the church has hopes of drawing a larger congregation in the near future as a result.

In conclusion, a church needs the area around it and the local population to come together and help it succeed. First Presbyterian offers so much for the area, but is relying on the younger generation to take leadership and help the church’s congregation last.

Like Mount Carmel, First Presbyterian always has made sure that “all are welcome.”

(The entire mccaravan.or staff contributed to this article.)

About the Contributor
Caravan staff