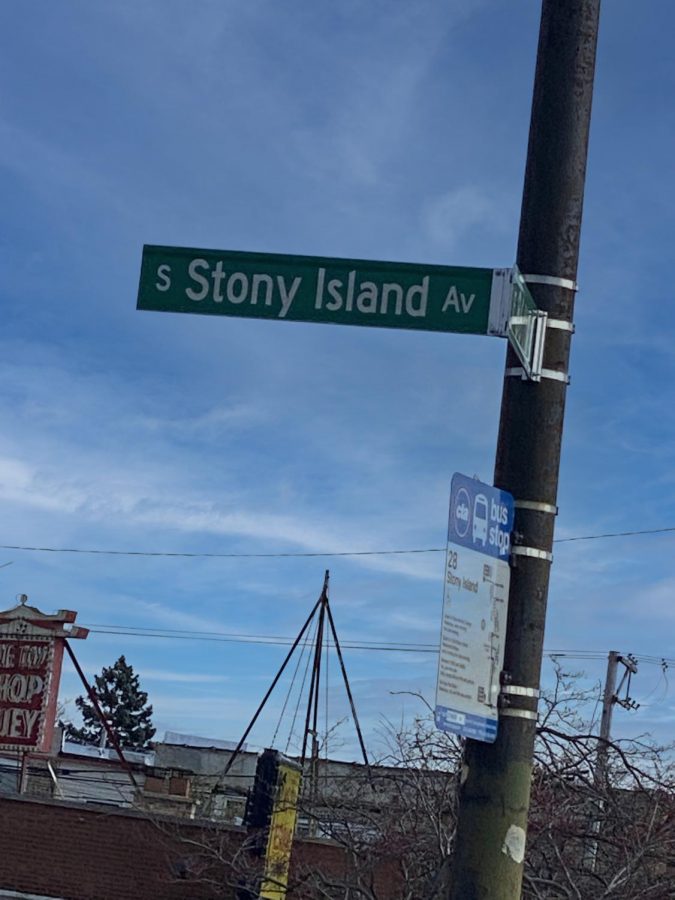 Stony Island Avenue street sign on the corner of 86th

Stony Island is a major avenue that runs through the heart of the South Side of Chicago from 56th Street south to the Calumet River. It is the main thoroughfare used to come north to Mount Carmel. The avenue has a rich history that influenced culture over many years which makes it a very important street in Chicagoland.

Changes in the avenue

Based on information contained in the book “Chicago’s South Shore” by Charles Celander, Stony Island wasn’t always the massive eight-lane avenue that everyone knows today. At one time it was just a four-lane street. Later a trolley line ran down the open space separating two sides of Stony Island. In 1975, buildings along the east side of Stony Island were demolished to further widen the street to accomodate increased traffic from South Shore Drive to the Chicago Skyway, which opened in 1958, and to the Bishop Ford Freeway.

Responding again to traffic and safety needs of businesses, residents, autos, bikes and pedestrians, city officials proposed the Stony Island Avenue Streetscape Master Plan  in 2010 which included improvements and shrinking the eight lanes to make bike lanes. The plan was to be a blueprint to guide future developments along the corridor to create a more community-friendly transitional traffic artery, but no major changes are yet evident.

Many historical buildings were built on or near Stony Island like the Hotel Del Prado on 59th Street between Blackstone and Kenwood, which was constructed in 1893 and made to be a permanent hotel for the Columbian exposition. It later provided accommodations to University of Chicago guests, students and professors – charging $10 per day.

The New Regal Theatre opened as the Avalon Theater at 79th Street and Stony Island and was built in August 1927.  The theater served as a live-performing arts venue until 1934. In the 1960s, more African Americans began to move into the area, who transformed the local culture, and used the theater for their unique musical and artistic talents.

The theater changed just as many times as its neighborhood, being sold in the 1970s and turned into a church.  Later it was sold to Regina Evans, the Country Club Hills, Illinois, Police Chief, in 2008.  Evans hoped to revive its history as a cultural venue, but lost control of the property and the theatre remains closed.

The Stony Island Arts Bank opened in 2015 in a renovated 1923 bank building at 6760 South Stony Island. It houses the Johnson Publishing archives and has hosted art exhibits and community meetings.

While on the topic of culture it’s only fitting to bring up Jackson Park where the World’s Columbian Exposition, also known as the Chicago World’s Fair, was hosted in 1893 to (belatedly) celebrate the 400th anniversary of Christopher Columbus’ arrival in the New World in 1492. An array of transit lines ran along Stony Island into the fair ground terminal directly east of Mount Carmel’s campus.

The area around Jackson Park contained other landmarks, too, like the Southmore Hotel at the intersection of 67th and Stony Island Avenue and the Tower Theatre that was located in Woodlawn on East 63rd Street. In its prime, the theater could hold approximately 3,000 people and had a large stage where shows were held in addition to motion pictures. The Southmore Hotel was a large building overlooking Jackson Park that was later turned into an apartment complex and eventually demolished as was the Tower Theatre.

The 63rd Street “L” line, demolished in 1997, ran above the Metra tracks and dropped down on the east side of Stony Island at 63rd Street, providing a major transit connection to the elevated train and commuter rail systems as well as a Greyhound bus terminal.

Stony Island Avenue has served as a connection to Mount Carmel for 120 years and will continue to evolve as Hayes Drive and Cornell Drive will likely be rerouted when the Barack Obama Presidential Center is constructed just northeast of Mount Carmel. Commercial businesses, residents, community groups, transit lines, autos, bicycles and pedestrians will help influence what it will all look like in the future.